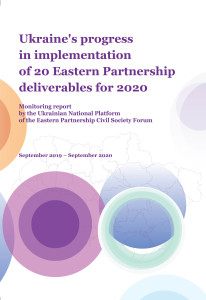 That is the fourth annual snapshot of successes in implementing the deliverables proposed in 2017 to guide the medium-term outlook in the EU’s relations with partner countries.

The level of deliverables’ implementation by both the Ukrainian government and the national governments of Azerbaijan, Armenia, Belarus, Georgia and Moldova should be a marker for European institutions in their approaches in forming a new horizon of common goals and objectives by 2025.

This study has several features compared to previous annual monitoring. First, the study forms a kind of finish line as of September 2020, which shows where the Ukrainian side has made progress, and where the deliverables were excessive or unimportant for Ukraine.

Second, the UNP EaP CSF experts offered their proposals for a new framework document in the context of the thematic priorities of the previous deliverables horizon.

Third, such monitoring has traditionally been the product of cooperation between the Ukrainian National Platform and the Government Office for Coordination of European and Euro-Atlantic Integration, which may indicate the continued synergy of state and non-governmental institutions concerned with Ukraine’s accession to the EU.

We hope that our developments will help Eastern Partnership policymakers in Brussels, representatives of relevant government institutions, independent researchers and scholars.

This monitoring was prepared in the framework of the project “Support to UNP EaP CSF“ implemented by the Institute for Economic Research and Policy Consulting (IER) with the European Union’s financial support.